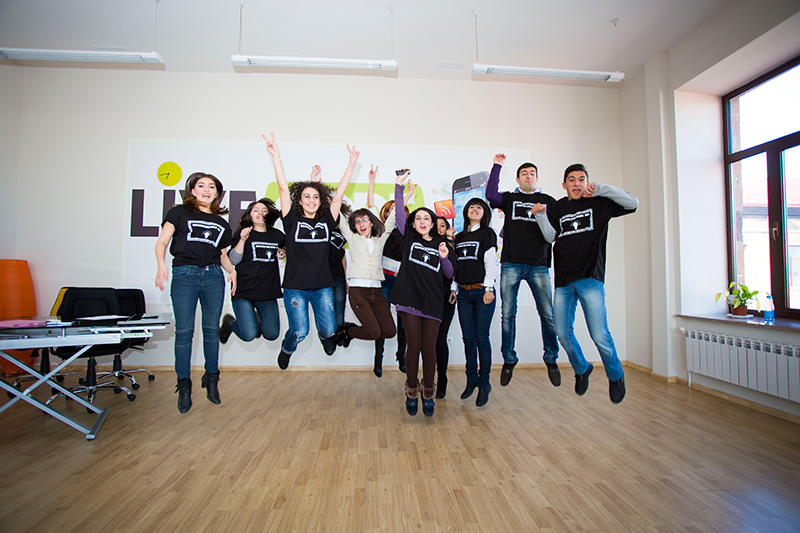 “We found out that with Livecode we can be very productive for mobile development. This is true, specially for those people who have never programmed before. Now, Livecode is the main development language at Digital Pomegranate.”

Gayane Ghandilyan didn’t know how to program. When she graduated from university and became the Operations Officer at Digital Pomegranate, a startup tech company, she realized the importance in everyone learning to code, including herself. After learning LiveCode, Gayane and the Digital Pomegranate team were able to efficiently, effectively, and consistently develop multi-platform apps in Armenia.

Funny you ask that question. I had just graduated from the university in Cross-Cultural Communications and was offered the position to be the operations officer for Digital Pomegranate, a startup software company. It was a completely new and exciting opportunity because I had never had any technical experience at all. I quickly learned that to lead the operations of a tech company, you have to know how to code, so I started taking time out of my weekly schedule to learn with everyone else. I have been amazed and surprised with the ease that people who have never programmed before have learned LiveCode – myself included.

Digital Pomegranate started to use LiveCode in March of 2014. At first, we did a simple game project with two young members of our team. They had never programmed before and we able to create Apps on their own by teaching themselves. We were all so impressed that we decided to investigate LiveCode as a development tool for commercial Apps. We found out that with Livecode we can be very productive for mobile development. This is true, specially for those people who have never programmed before. Now, Livecode is the main development language at Digital Pomegranate.

I did not have any experience, but some of the team members studied HTML+Javascript, C, Java and PHP at university. The founders of the Digital Pomegranate were looking for a way to quickly develop multi platform Apps in the town of Gyumri, Armenia so they introduced LiveCode. There were only a few qualified programmers in the city, so we knew we would have to train almost everyone from the beginning, so LiveCode was the perfect choice.

It was suggested by one of our co-founders Todd Fabacher who has many years of experience in the industry. But we looked at several different cross platform options in the beginning. We evaluated PhoneGap, XoJo and Appcelerator. None had the ease of use and productivity of LiveCode. The deciding factors were (i) the ability to train new programmers in just 12 weeks, (ii) cross platform functionality and most important, (iii) it also had a web scripting solution. No other platform had the range of functionality like LiveCode.

Hackathon YAN is a contest of programming and innovative ideas primarily sponsored by the Microsoft Innovation Center. This year, Hackathon[YAN] traveled to Gyumri, Armenia’s second largest city, to the World Bank’s sponsored new technology center. There were 60 teams coming from different regions of Armenia. They brought a wide range of projects including B2B, B2C solutions, games, educational and entertainment platforms, etc.

Within 24 hours, the participating teams (including programmers and non-programmers) developed prototypes/demo versions of their web or mobile applications. At the end, each team gave a quick pitch which was assessed by the panel of experts who selected 3 winners.

Our office is located at the Gyumri Tech Center, so since it is our “home” and we did not have to travel, we participated with 2 teams of 6 people each. We wanted to focus on Apps that could be both profitable businesses and also have social benefits. The first App was the Walking Tour App. It is a mobile App (for both iOS and Android) aimed at giving small towns and neighborhoods of large cities the ability to attract tourists away from traditional touristic destinations by allowing the easy creation of interactive walking tours. Our goal is to create a data entry system used by non-programmers to just enter the data needed for their walking tour app such as text, images, video and audio in multi-languages. The data is stored in a SQLite database and sent to us where we attach it to pre-made LiveCode templates, stacks and then bingo – their own Walking Tour App is created. With the help of our application, the town or neighbourhood will have a tool to attract more tourists and have them experience their unique culture while at the same time boosting economic activity for the region.

One of the unique solutions our App offers is a hosting solution for a small yearly fee. Users or our team can update the database or add events to it, and the system updates the webserver. Then whenever the app requests updates to the webserver it updates the local database on the mobile device. This way not only we are a fraction of the cost of our competitors, but we also have a valuable recurring income stream. It also benefits our towns, villages and neighborhoods as they can sell “featured” listings and update them dynamically.

The second area we chose to present at the hackathon was a solution for rural travelling doctors called Schedule.Clinic. It is a medical management and appointment booking system for traveling medical clinics such as Dentists, Psychologists, Therapists, Gynecologists, etc. We added in the ability for the clinic to set the location of the doctors at specific location on specific dates. Schedule.Clinic also has a complete automatic email system to notify patients in areas of the comming doctors and an online booking system that allows these patients make appointment ahead of time at the most convenient time for them, without depending on working hours of assistants.

The jury of experts chose the Walking tour app as one of the 3 winners.

There was a whole diversity of programming languages and coding platforms, mostly PHP for the web, but there was a stronger concentration on mobile development using Java and Objective C. We were one of the few teams using a cross platform tool.

How many people were in your team? How did you split up doing the work to code the app?
We had 2 groups of 6 people each. We replicated the structure that we use in our office. Each team had: a project/business manager, a user interface specialist, a web designer, a back-end and a front end programmer. The judges highly appreciated the fact that not only did we code the App, but we did market research, competitor analysis, feature requirements and then UI prototyping. Because we only had 24 hours, by doing the proper design upfront it allowed us to be more productive and focus on coding.

The most important factor was the strength of our idea. We took a problem that everyone understood – the poor economic development of our city. We also showed that many cities around the world have a similar issue and we created a simple cost effective solution to help boost economic activity through tourism. We showed that tourism is increasing in Armenia and around the world, but it is concentrated on few locations. One of the reasons for this is a lack of information about small cities and what they have to offer. By offering our solution to towns, villages, neighbourhoods, communities and districts we become another marketing channel for our future customers as the app will help attract tourists into their city streets, shops, galleries and cafes, which will have it impact on the local economy.

Our goal is to have a beta launch in January, 2015. Now we need to complete the software, for both platforms: iOS and Android. We also need to complete our marketing website and plan for a content marketing campaign. We have learned that it just as important to work on marketing and promotional material as it is to code. So for the next six weeks we will finish the code and the business related issues.

10. What doors do you think winning this competition might open for you?

Winning at the Armenia’s largest hackathon contest brings more exposure and media coverage. The contest is organized by Microsoft Innovation Center Armenia which opens a lot of doors for startups, including acceleration, opportunities to pitch for investors and participation in different kinds of expos and contests.