Many different initiatives are being taken to bring women to the front of this fun, smart high tech industry, including She Codes in Israel, Girls Who Code in NYC, Coder Girl by Launch Code in the US, and Girl Develop It (again in the US), etc. Our company, Digital Pomegranate, also stands out with the goal to teach women developers and have an economic impact on Gyumri, Armenia’s second largest city. Armenia, the former Soviet Union’s big brain – with thousands of smart and creative engineers – is an IT leader in the region of South Caucasus. Even though it specializes in the software industry, Armenian IT outsources instead of developing its own products. Digital Pomegranate is changing that picture and bringing IT focus to Gyumri. This innovative company has a female shareholder, a female Operations Officer and 12 female developers out of 18 staff members with one goal in mind: to boost economic development in Gyumri through technology – Girl Power Style.

My name is Gayane Ghandilyan. I’m Digital Pomegranate’s COO and as a female in the tech industry, I encounter many challenges, such as:
1. I feel the need to prove to my male co-workers that I am smart enough to share projects with them.
2. IT work is often accompanied with late night hours and it makes my team and me very, very tired by the end of the day.
3. Most of the Armenian IT industry is based on exports, so IT workers have to work for clients in different timezones and stay awake during the office hours of those time zones.
4. It is extremely hard to balance work and family. In my personal situation, I just got engaged and I am beginning to see the importance of spending more time in my private life.

These are just a few of the many challenges faced by women in the IT industry. Digital Pomegranate seeks to break the stereotypes about female coders “not being smart enough” and female tech industry leaders “not being creative enough.”

An example of our female-dominated tech company’s success was when we participated in a tech contest and won second place with our app idea (a Walking Tour App). We used Livecode as our programming language and with a female project manager and three female developers, we inspired everyone to code and create apps. We will release the beta of our Walking Tour App in April. The app will be released as a multiplatform solution for small and medium sized cities, neighbourhoods, communities, and university campuses. It is a great project that we’re very proud of as it combines tech and tourism for the sake of small town economic growth (much like what we hope to see in Gyumri). 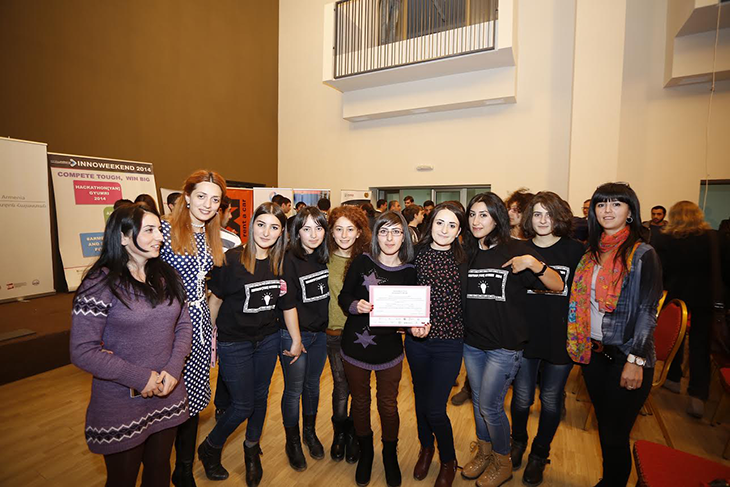 Create It With LiveCode was a perfect match for Digital Pomegranate as we always try to implement a non-traditional approach.

So, as you can see, female success in the trendy tech world is no longer a myth. When gathering your team for your next app project, don’t forget to include the ladies!